How Green Collar Jobs can reverse the Brain Drain and create a BRAIN GAIN.

How Green Collar Jobs can reverse the Brain Drain and create a BRAIN GAIN.

What’s the best way to give Germans of all socioeconomic backgrounds a tangible stake in fighting for issues like global warming?

Easy: Make it their livelihood. Imagine what would happen if millions of everyday jobs—plus new ones created for people who are currently unemployed—were in fields like renewable energy, sustainable agriculture, and green building.

Right now, there’s a great opportunity not only to make Germany's economy stronger by making it greener, but to make Germans living in unemployment part of a revitalized middle class. The first thing we have to do is provide the training that will turn 20th century blue-collar jobs into secure 21st-century green-collar jobs.

Solar CITIES starts with faith in Everett's Roger's Innovation Diffusion model and Maloney's 16% rule for Accelerating Diffusion. Our faith is based on years of lived experience and observation around the world.  We believe that the same rough percentages of innovators, creatives, early adopters and visionaries exists in all populations around the world and that what we really need to do to bring about thriving development is simply work with the 16% on the left side of the curve, the  2.5% innovators and the 13.5% early adopters.  By working with them as trainers of trainers and following our motto of "Connecting Community Catalysts" as the prime directive for diffusion industrial ecology solutions (like Biogas) we can allow natural positive social networking externalities to accelerate the diffusion without worrying about "reaching everybody" much less trying to "save the world".

The key is finding that 2.5% that exists in every immigrant community from Germany to the US, made up often of refugees hungry for the opportunity to reverse the damages done in their home countries.  Green collar jobs are one of the key ways to provide economic opportunities and create environmental sustainability and justice. 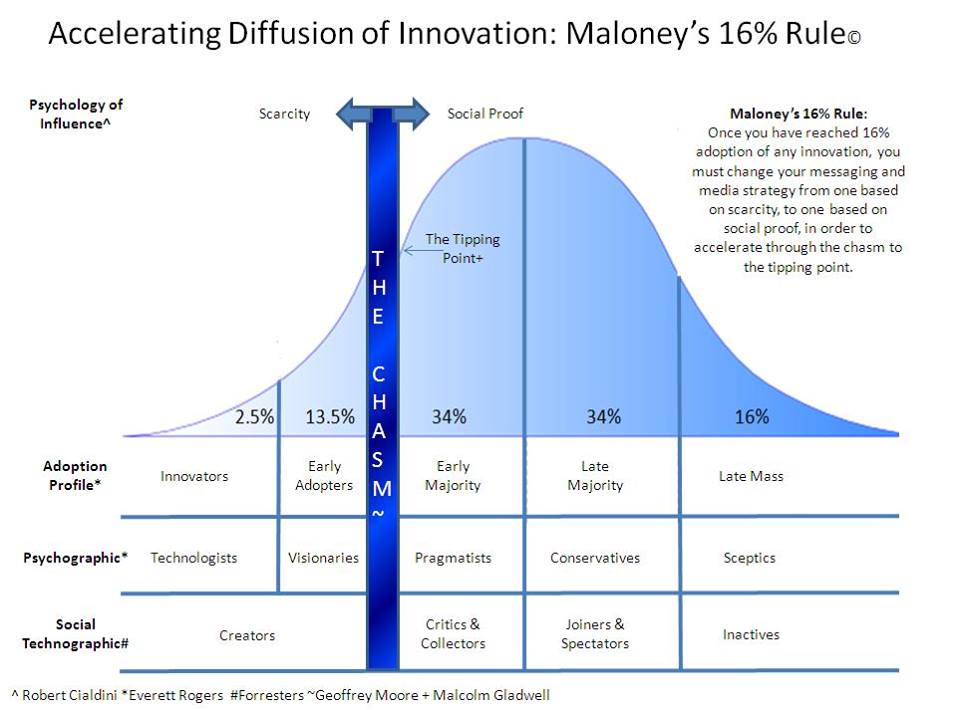 According to the National Renewable Energy Lab, the major barriers to a more rapid adoption of renewable energy and energy efficiency are insufficient skills and training.

In December 2007, America signed its own Green Jobs Act to train workers for green collar jobs. It authorized $125 million for workforce training programs targeted to veterans, displaced workers, at-risk youth, and families in extreme poverty. It will train people for jobs like installing solar panels and weatherization. The curricula being developed target the unemployed and the immigrant labor force.

Germany can do the same.

Provide Pathways Out of Poverty

Require Some New Skills (and some new thinking about old skills)

Tend to be Local Jobs

Protect Our Health and the Health of the Planet

The Solar CITIES Green Job Training Academy aims to expand, educate and engage the base of support for climate solutions and a clean energy economy in Germany. It does this by training leaders from low-income communities and communities of color (immigrant communities) to communicate the promise of the green economy — and take action to realize that promise. With Solar CITIES Academy training, these leaders engage their communities in support of the clean energy jobs agenda.

Solar CITIES Fellows are on-the-ground leaders in the movement to create an inclusive green economy strong enough to lift people out of poverty. The proposed Academy offers an intensive four week training module that offers theory classroom and hands-on work dealing with

Restoration of the environment,

What the Solar CITIES Green Academy Does

Solar CITIES Academy stresses the importance of meeting climate protection goals in job training initiatives and gives German companies involved in green technology both at home and abroad a larger and more qualified labor pool. The Solar CITIES Academy's four-week module can be integrated into existing curricula at vocational centers and community education/adult education centers where job retraining is already being implemented, and can be integrated into high school and college curricula.

Works with the Job Center to identify, recruit and train workers from low-income communities and immigrant communities across Germany to participate in expanding Germany's leadership in green technology and services worldwide. Experience in other countries has shown that Green job trainees also more effectively deliver, in their own voices, and in their own mother tongues, key "green jobs" messages that expand the opportunities for creating a clean energy economy.

Gives immigrant laborers and displaced native workers hope that they can contribute their handwork skills to the new wave of green economy solutions. It gives craftsmen (roofers, carpenters, plumbers, electricians, builders) the chance to get involved with green retrofitting of homes, apartment buildings and businesses. It also helps develop community leadership so that trainees can organize members of their communities to influence public opinion to participate more broadly in both local integration goals and international climate goals.

Prepares immigrants for future jobs as 'green ambassadors' to the countries of their origin, giving them the opportunity to join Germany's sustainable development initiatives in foreign countries. With their knowledge of their home country's language and culture, Solar CITIES Green Academy training would make them powerful assets to German companies and Entwicklungshilfe Programs seeking to expand their presence in countries like Africa, the Middle East, Asia, Russia and Eastern Europe.

Once they have completed the four-week fellowship, Fellows join an active alumni network that Solar CITIES would maintain online. This online community would link participants together and give them links to Green job opportunities.

well as conventional businesses and trades, created by a shift to more sustainable

practices, materials, and performance. It includes both lower and higher skilled

employment opportunities that minimize the carbon footprint of all inputs

Thirty seven percent of the green job opportunities require little to no preparation,

and thus have the fewest barriers to entry. Forty two percent of the green jobs

associate’s degree while a few will require a bachelor’s degree or higher. (Source: DC Office of Planning, in conjunction with the Washington DC Economic Partnership and the DC Department of Employment Services)

The top occupations that require the least preparation are:

The top occupations that need moderate job preparation include:

Below are two video examples of our successful training with Solar CITIES team member Paul "Chido" Iwunna, who had been a factory worker in Essen for 12 years and  learned biogas and treadle pump systems with us in Germany and then took us to his homeland regions in Nigeria to be a returning prodigal son as a "trainer of trainers". Based on this experience we got the confidence to move forward with this as a key solution to the joblessness and despair immigrants to Europe are facing.